The fleet arrived safely at Inverness Marina on Friday 6th July. The story of the trip there is below. By Tuesday 10th, Drifter was at Lagan Locks. Tidecatcher was at Banavie, at the top of Neptune’s Staircase, planning to descend the flight of seven locks on Thursday afternoon and head out to Loch Linnhe on Friday morning.

Sunday 1 July: All boats off Granton pontoon by 7am. Haar came in about 1130 slowing progress and then lifted at about 1430. All boats bar one (who lost a Genoa) arrive and berth safely at Arbroath between 1700 and 1830. Boats on hammer head pontoon with some rafting.

Monday 2 July: Weather not suitable for departing today for Peterhead or indeed anywhere North. Would have been a beat all the way so collectively decided to enjoy sunshine in Arbroath.

Final boat arrived at Arbroath (having replaced the Genoa with an old spare).

Tuesday 3 July: Blue sky sun shining as we depart for Peterhead. Forecast for light winds, maybe F3 later. One of our boats trying to sail about 2 NM outside Arbroath but not catching wind. Lobster pots going in and out of Arbroath major hazard. Will post some photos later today.

Bascule arrived in Peterhead Marina about 19:30. At 20:50, Solveig was a couple of miles out, just passing Buchan Ness, and arrived at the Marina about 21:30.

Wednesday 4th July: Bascule and the main group reached Whitehills on Wednesday afternoon, going round the north-east corner of Aberdeenshire with the tide and wind, while Solveig headed for Stonehaven, for the start of her journey back south, and got there at 2130 after a 12 hour voyage against the wind. The weather was windier than forecast off Fraserburgh, boisterous enough for at least one boat to take in a couple of reefs.

Later it seemed from the WhatsApp traffic that there was a lot of beer consumed in the pub and on board!

Thursday 5th: The main group sailed – “uphill!” – to a very busy Lossiemouth, with some negotiation being required to locate berths. Solveig had a brilliant sail from Stonehaven to Anstruther via the Bell Rock Lighthouse, and was tied up against the wall in Anstruther at 18:00.

Friday 6 July early start at 7 am so we can all get to Kessock Bridge for about 4pm. Lots of passage planning going on. Very hot – even so, one crew member on Drifter wore her oilies! Bascule was in Inverness Marina by 15:30. 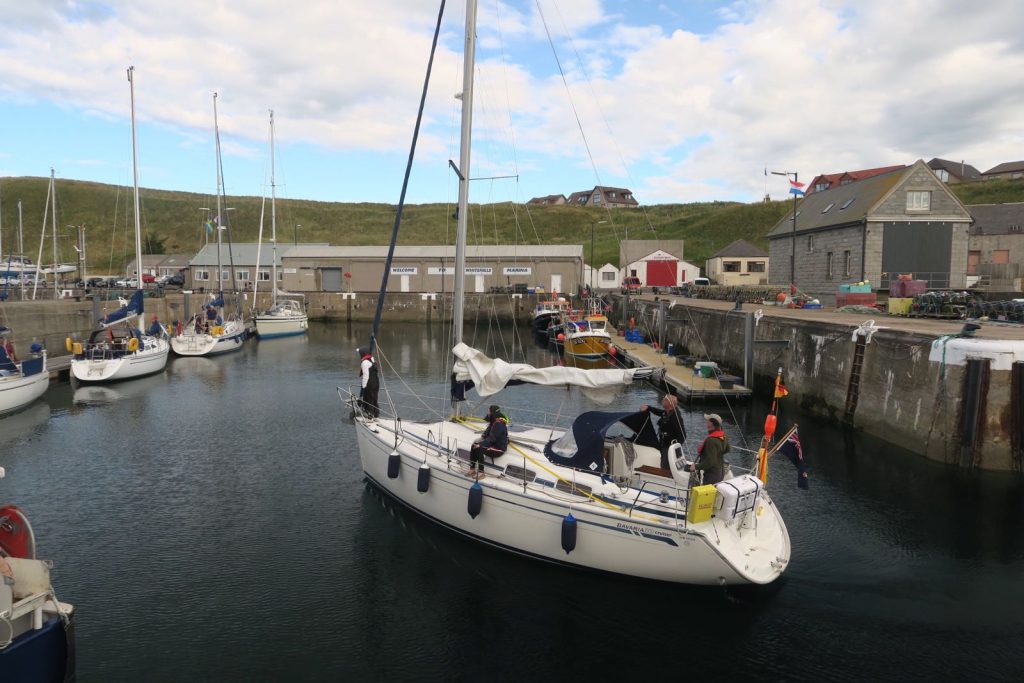 Drifter arriving in Whitehills, other RFYC boats on the pontoon behind. Whitehills arrival photos courtesy of harbour master.

Shorts or oilies – take your pick!

There are no upcoming events at this time.